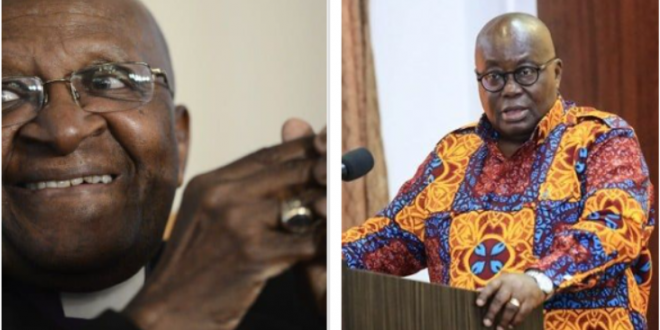 The President , Nana Addo Dankwa Akufo-Addo, has sent a message of condolence to President Cyril Ramaphosa and to the people of South Africa on the death of Archbishop Desmond Tutu.

“The history of Africa’s struggle for freedom from colonialism, imperialism and the racist ideology of apartheid has been immeasurably enriched by the contribution of this jovial, dedicated and principled defender of the liberties and rights of Africans and oppressed peoples of the world,” Akufo-Addo posted on Facebook.

The President noted that  his work as chairperson of the historic Truth and Reconciliation Commission of South Africa, established by his outstanding compatriot, contemporary and friend, Madiba, President Nelson Mandela, the 1st President of democratic South Africa, was instrumental in promoting reconciliation amongst the peoples of South Africa in the post – apartheid era, which enabled a united South Africa to emerge from the debris of apartheid, much to the astonishment of many in South Africa and around the world.

He added “The Commission provided an example which was followed elsewhere in several countries in Africa, where systematic violations of human rights had at a given moment become part of their political culture, including in our own Ghana.”

President Akufo-Addo, in conclusion, stressed that “ Archbishop Desmond Tutu run his race set before him, and leaves behind indelible footprints in the sands of time. May his soul rest in perfect peace in the bosom of the Almighty, until the Last Day of the Resurrection when we shall all meet again. Amen!.”