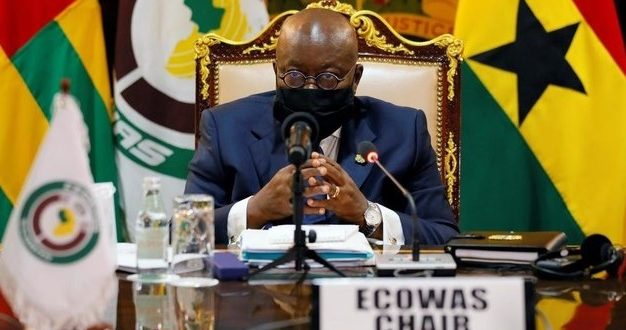 The Economic Community of West African States (ECOWAS) leaders have expressed worry over what they call deteriorating democracy within the sub region.

The leaders say the recent coup in Burkina Faso is a clear example of how democracy is failing in West Africa.

Opening a virtual ECOWAS summit, President Nana Akufo-Addo, the ECOWAS chair, urged his colleagues to do all they can to uphold the tenant of democracy in the sub-region.

“The deteriorating political situation should be a matter of great concern to all of us. No country is insulated from its occurrence in the community, and we have to take action to nip it in the bud.”

“Added to this is the complex security environment occasioned by terrorist attacks and pandemics, presenting for us a toxic situation,” President Akufo-Addo said.

The virtual ECOWAS emergency summit was convened to deliberate on the happenings in Burkina Faso.

The army in the West African country on Monday said it had ousted the government of President Roch Kaboré.

Mr. Kaboré came to power after former president Blaise Compaoré was overthrown by a popular uprising in 2014, following which he then fled to Ivory Coast.

Mr. Compaoré is being tried in absentia for the assassination of former revolutionary leader Thomas Sankara.

The soldiers cited the government’s lack of commitment to fighting Islamist Militants and general economic hardship.

Since 2015, Burkina Faso has battled with a jihadist insurgency, which spread from neighbouring Mali.