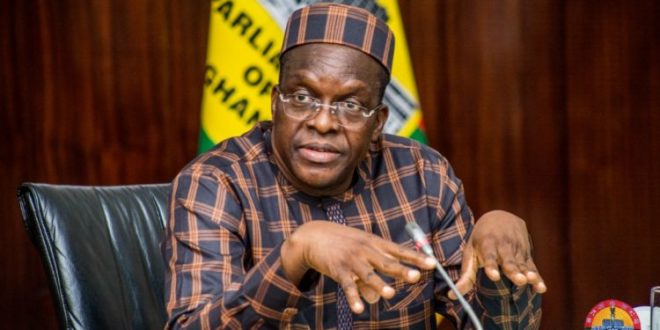 The Speaker of parliament, Alban Bagbin, left the House on Friday following a long delay in the commencement of proceedings.

This happened after the Majority Leader, Osei Kyei Mensah-Bonsu, hinted that the controversial electronic transaction levy will be laid before the house tonight.

Citi News’ Duke Mensah Opoku said the Speaker was seen exiting the house in his vehicle after 5:00pm.

Earlier today [Friday], the Minority re-iterated its position not to support the imposition of the electronic transaction levy in any form.

The leadership of the Minority thus rejected a fresh position from government to reduce rate of the levy to 1.5 percent from the initial 1.75%.

The reduction is informed by a decision to factor into the rate, a concession from the Telcos to reduce their 1 percent charge by 0.25 percent.

The delay in starting the main businesses of the day became a major source of concern for the Member of Parliament for North Tongu, Samuel Okudzeto Ablakwa, who questioned the Majority Leader over the delay in commencing sitting.

“It is already 18 minutes past 5:00pm. The House was adjourned to 10:00am today, and we’ve been waiting for over 7 hours. Can the Majority Leader give us a specific timeline the government side expects to conclude the negotiations or engagements that are going on because it has been difficult to plan for other activities” he quizzed.

See also  Groups Like #FixTheCountry Movement Must Be Commended, Not Condemned - Alban Bagbin

I'm Adwenpa-Hene |Blogger & Broadcaster Journalist. I am the CEO and manager of this noble website. I publish on Entertainment, Sports, Politics, Lifestyle, and Technology. You can also follow Us on : YouTube Channel - My Ghana Media TV, Facebook - MyghanaMedia TV , Twitter - @MyGhanamedia2 & Instagram - My Ghana Media TV. Email Address: [email protected] Contact Us: 0200818719
@@MyGhanamedia2
Previous Akufo-Addo Laments Toxic Situation In West Africa Following Burkina Faso coup
Next E-levy Is Being Introduced At The Lowest Rate For Any Tax In Ghana – Gov’t