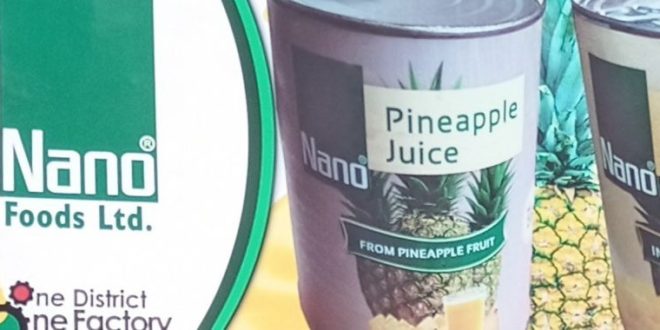 A fruit processing factory under government’s One District One Factory (1D1F) programme, Nano Foods, has made its first shipment of processed fruits to the Canary Islands in Spain.

This was revealed in a tweet by the Nsawam-Adoagyiri MP, Frank Annoh-Dompreh, on Sunday.

The pineapple juice processing factory was commissioned on Thursday, May 20, 2021 in Nsawam as part of efforts to provide both direct and indirect employment for people.

Nano Foods, formerly known as Astek, holds the capacity to produce about 6,500 tonnes of canned drink annually, part of which will be exported to other African countries, American and European markets.

Mr. Annoh-Dompreh expressed satisfaction over the progress made in boosting local labour, a drive he reckons will also aid in reducing the youth unemployment in the area.

Astek was one of the great indigenous companies in Nsawam, producing popular brands like Refresh juice. Unfortunately it collapsed. Now under 1D1F, the company has been revamped as Nano foods & will process pineapples for the local & foreign market, creating jobs and value #1D1F pic.twitter.com/tOCFaTpPLB

One District One Factory Programme is an initiative instituted by President Akuffo-Addo to address the challenges of slow economic growth at the district level through national industrialisation.

The programme is expected to facilitate the creation of between 7,000 to 15,000 jobs per district and between 1.5 million and 3.2 million nationwide by end of 2021.

See also  Audio: ‘Shame On You Adjoa Safo; Resign If You Can’t Do The Job’ – Majority Chief Whip Fumes

1D1F is not mere rhetoric

President Akufo-Addo has stated that the One District One Factory programme will industrialise Ghana with the establishment of more industries to create more job opportunities.

According to him, it aims to boost massive private sector-led nationwide industrialisation drive which will equip and empower communities to utilise local resources in manufacturing products that are in high demand for both local and international markets.

I'm Adwenpa-Hene |Blogger & Broadcaster Journalist. I am the CEO and manager of this noble website. I publish on Entertainment, Sports, Politics, Lifestyle, and Technology. You can also follow Us on : YouTube Channel - My Ghana Media TV, Facebook - MyghanaMedia TV , Twitter - @MyGhanamedia2 & Instagram - My Ghana Media TV. Email Address: [email protected] Contact Us: 0200818719
@@MyGhanamedia2
Previous 2021 AFCON: Sports Minister Reveals How Much Was Spent On Black Stars
Next Gov’t Is “More Than confident”, MoMo Operators Won’t Lose Jobs When E-levy Is Implemented – John Kumah