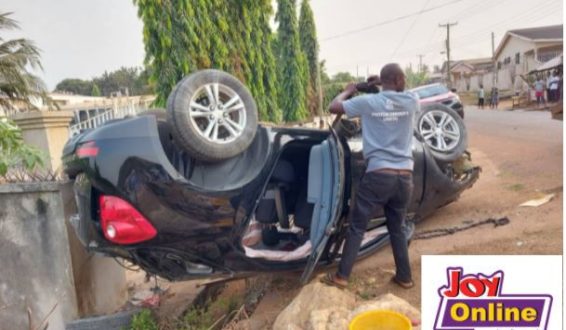 A first-year student of the Kwame Nkrumah University of Science and Technology (KNUST) is feared dead after a private vehicle knocked down a number of students at Ayeduase close to the KNUST campus.

Eyewitnesses say the female student was not responsive after the incident involving the black saloon car with registration number AS 6241-22.

Also, three others who were with her sustained various degrees of injuries and were all rushed to the Tech Hospital.

According to eyewitnesses, the speeding vehicle skidded off the road, crashed into some structures and run into some pedestrians by the roadside.

The vehicle also killed two sheep in the process.

Giving further details, Daniel Akwasi Ofori, who was at the scene of the accident said the vehicle hitting the sheep to a large extent reduced its speed and the number of casualties.

According to reports, the old man of about 70 years has received a née car from a relative abroad and after licensing decided to test the car but wasn’t so conversant with the car and lost control of the vehicle. Causing him to hit 4 people. pic.twitter.com/vcv5V5B0PQ

Although it is not clear what caused the driver of the vehicle to lose control, some residents want the Assembly to consider constructing speed ramps on the stretch.

They claim drivers plying the stretch are reckless despite Ayeduase being a hub for students due to the number of hostels located in the area and its closeness to the KNUST campus.

I'm Adwenpa-Hene |Blogger & Broadcaster Journalist. I am the CEO and manager of this noble website. I publish on Entertainment, Sports, Politics, Lifestyle, and Technology. You can also follow Us on : YouTube Channel - My Ghana Media TV, Facebook - MyghanaMedia TV , Twitter - @MyGhanamedia2 & Instagram - My Ghana Media TV. Email Address: [email protected] Contact Us: 0200818719
@@MyGhanamedia2
Previous Video: Down But Not Out – Inspirational Story Of A 16-year-old Physically-Challenged Aspiring To Be A Footballer
Next Majority Leader, Kyei-Mensah-Bonsu To Bow Out Of Parliament After His Current Term Expires