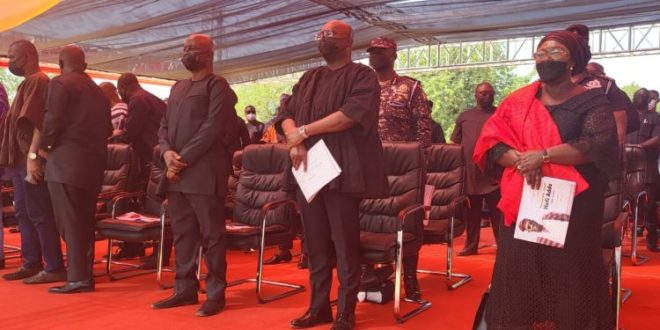 The Spokesperson of Vice President Dr. Mahamudu Bawumia, Dr. Gideon Boako, has discounted reports that their convoy got involved in an accident.

In a short statement on Saturday (12 February), Dr Boako clarified that it was the vice-president’s advance security team that rather got involved in an accident three days ago

He has indicated that Vice President Dr. Bawumia is safe and even leading a government delegation at the funeral of late Joseph Kofi Adda, the former Member of Parliament for Navrongo Central and Minister of State

Dr. Bawumia at the funeral of Kofi Adda with the chief of staff and others

“Vice President Dr. Bawumia’s convoy has not been involved in any accident,” he clarified.

“A vehicle in the advance team of security that usually go ahead of the Vice President, unfortunately, got involved in an accident on their way to Tamale some three days ago.

“Vice President Bawumia is currently leading a government delegation to mourn with the family and friends of the late Hon. Joseph Kofi Adda, former MP for Navrongo Central and Minister for Aviation.”

This is to respond to widely circulated news that one person died on the spot while two others were seriously injured when the vehicle they were travelling in veered off the main Buipe-Tamale road.

They were members of an advance team of security for the Vice President, who is currently acting as President due to the 10-day trip of President Nana Addo Dankwa Akufo-Addo.

Adda, also a former Member of Parliament for Navrongo Central died at a hospital in Accra after a short illness.

He first became MP for the Navrongo Central in 2003, through a by-election after the passing of the incumbent, John Setuni Achuliwor.

He later retained his seat in the parliamentary election in 2004.

Adda retained his seat when the NPP lost the general elections in 2008. He, however, lost the seat in the 2012 elections to Mark Woyongo.

He was a financial economist and a management consultant.

He had his secondary education at St. John’s School, Sekondi in the Western Region and obtained a Bachelor of Science degree in politics and economics from Indiana Wesleyan University, Marion, Indiana, United States.

He studied for a Master’s degree in International Affairs, specialising in Finance and Banking at the Columbia University, New York. He went on to get a graduate certificate in African Studies from the same university.

In 1989, he obtained a certificate in French and civilization from the Sorbonne University, Paris, France. He worked as an executive officer at the Ministry of Trade and Industry, Ghana in 1979.

Between 1983 and 1984, he worked as a research analyst intern at the Third World Trade Institute, New York, USA. Over the next two years, he was an account executive and management trainee at the Equitable Financial Service, Inc. in New Jersey, USA.

Between 1996 and 2000, he worked in various capacities at the Ministry of Finance, Ghana.

He was appointed the Minister for Manpower Development and Employment by President John Kufuor in 2005.

On 28 April 2006, he was moved in a cabinet reshuffle to the position of Minister for Energy.

He was later replaced by Felix Owusu-Adjapong as Minister of Energy by President Kufuor.

I'm Adwenpa-Hene |Blogger & Broadcaster Journalist. I am the CEO and manager of this noble website. I publish on Entertainment, Sports, Politics, Lifestyle, and Technology. You can also follow Us on : YouTube Channel - My Ghana Media TV, Facebook - MyghanaMedia TV , Twitter - @MyGhanamedia2 & Instagram - My Ghana Media TV. Email Address: [email protected] Contact Us: 0200818719
@@MyGhanamedia2
Previous Video: Man Digs Own Grave, Buys Casket And Drinks For Guests Ahead Of His Funeral
Next Akufo-Addo’s Record In Press Freedom Is Flawless – Former NPP MP