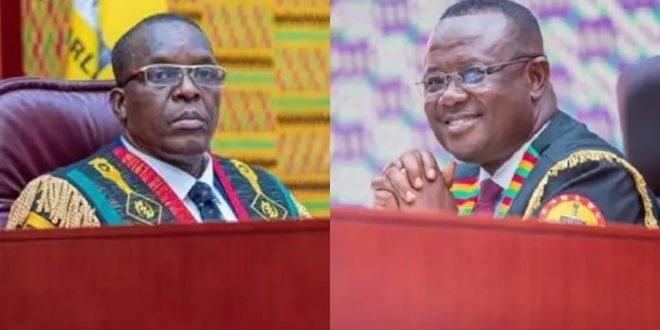 It Is Illegal, Unconstitutional And Offensive For 1st Deputy Speaker To Overturn My Ruling – Alban Bagbin

The speaker has described the ruling made by his Colleague Joseph Osei Owusu the Member of Parliament for Bekwai who double as the first Deputy Speaker as illegal, unconstitutional and offensive.

Bagbin, while presiding over the sitting on Wednesday, February 23, 2022, said despite his disapproval of Joe Osei Owusu’s ruling, he will not take steps to reverse it.

The Speaker of Parliament, Alban Bagbin, had early on admitted the motion from three Members of the Minority Caucus for an inquiry into the expenditure made by the government since the outbreak of the COVID-19 pandemic in 2020.

The Minority Leader, Haruna Iddrisu; the Minority Chief Whip, Mohammed Muntaka Mubarak; and the Ranking Member on the Finance Committee, Dr. Cassiel Ato Forson, filed the motion which sought to constitute a bi-partisan parliamentary committee chaired by a member of the Minority to probe COVID-19 expenditure.

The Private Member’s Motion was captured in the order paper for Thursday, November 4th, 2021

But Joseph Osei-Owusu while presiding in the stead of Bagbin on Tuesday, February 22, 2022, dismissed the motion, saying that the work of such a bi-partisan committee is already provided for by the Constitution, to be conducted by the Auditor General and the Public Accounts Committee (PAC).

Bagbin in 2021 took issue with Joe Osei Owusu over a similar incident when the latter overruled Bagbin’s directive to stand down the approval of the 2022 budget statement and economic policy.

“This is the second time the 1st Deputy Speaker has taken the chair and has made a ruling whose effect was to overrule a position I have earlier on established before the House,” he said.

The nature of Ghana’s current parliament has somehow deepened disagreements between the two major parties, particularly as the Speaker is known to be aligned to the opposition party, coupled with the fact that no side has an absolute majority in the house.

The Penchant of first deputy speaker to overrule my rulings is unconstitutional, illegal and offensive

After Joseph Osei-Owusu dismissed minority ‘s motion for probe into use of Covid-19 funds#StarrNews pic.twitter.com/ptTeb6wbL7

I'm Adwenpa-Hene |Blogger & Broadcaster Journalist. I am the CEO and manager of this noble website. I publish on Entertainment, Sports, Politics, Lifestyle, and Technology. You can also follow Us on : YouTube Channel - My Ghana Media TV, Facebook - MyghanaMedia TV , Twitter - @MyGhanamedia2 & Instagram - My Ghana Media TV. Email Address: [email protected] Contact Us: 0200818719
@@MyGhanamedia2
Previous Supreme Court Set 9th March To Rule In The Case Of Deputy Speaker’s Voting Rights
Next UG, UEW Chapter Of UTAG Votes Against Suspension Of Strike