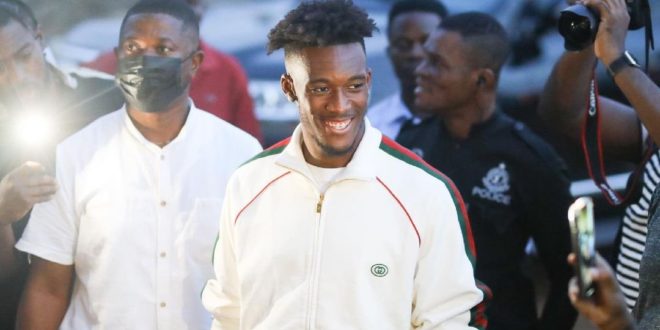 The senior men’s national team, Black Stars, is on the cusp of receiving a major boost prior to the 2022 FIFA World Cup. Long-term target Callum Hudson-Odoi has reportedly completed processes in acquiring his Ghanaian passport.

The English-born winger of Ghanaian parentage has dropped many hints of switching his allegiance to the West African nation following a series of snubs by England boss Gareth Southgate.

In a post on Twitter, by ABN -Angel FM Accra-based sports presenter, Saddick Adams (Obama) the Chelsea winger was reportedly assisted to complete the process of acquiring his Ghanaian passport – a vital step in switching nationality.

Former Board Chairman of the National Sports Authority, Kwadwo Baah Agyeman has revealed that Chelsea winger Callum Hudson-Odoi was assisted to complete processes to acquire his Ghanaian passport during his last visit to the country. pic.twitter.com/acslp5yHDx

According to the emerging reports, Odoi completed the process during his last visit to Ghana during the winter break.

The 21-year-old attacker, who has represented England at all youth levels, has been on the radar of the GFA and with the Black Stars qualifying for the World Cup it is believed that could be the final allure to convince him.

Despite playing on three occasions for the Three Lions, a change to FIFA’s eligibility rules means he can still switch to Ghana in November, which coincides with the start of the upcoming Mundial.

Callum Hudson-Odoi has stated emphatically that he is yet to make a final decision on the country he will represent between the Black Stars of Ghana and the Three-Lions of England.

The Chelsea star has represented England at every youth level from U16 to U21 before making his first senior international appearance in 2019.