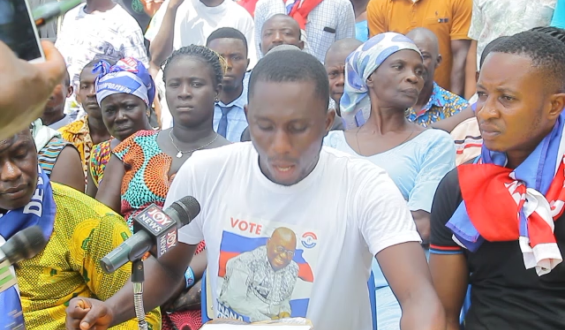 Angry youth of the governing New Patriotic Party (NPP) in the Hemang Lower Denkyira Constituency of the Central Region have sent a strong signal to the Electoral Arbitration Committee not to go ahead with elections in the constituency.

The party has published its timetable for the constituency elections across the country, but the aggrieved NPP youth said the claim that polling station elections had already been conducted is false. Therefore, any attempt to elect constituency officers would be fiercely resisted.

At a news conference at Twifo Hemang, on Wednesday, the spokesperson of the aggrieved delegates, Christopher Ampoful, warned the NPP elections committee not to disregard their request if they want peace to prevail in the constituency.

Mr. Ampoful alleged that during a meeting with the national ADR committee to settle the issues about the polling station elections, the MP for the area, Bright Wereko-Brobby, told a committee member that he, the committee member, should do everything possible in his power to avoid further elections in the constituency.

He added that following that directive, the MP and his associates were seen jubilating in the constituency because they said Hon. Cecilia Abena Dapaah had told the MP only (9) polling station elections would be conducted.

Additionally, Mr. Ampoful said the Central Regional Executive of the party has provided a time table which indicates that there would be constituency elections in Hemang Lower Denkyira. The publication of the timetable, they noted, confirms what people from the MP’s camp are saying.

The youth contended that they will fight to the last drop of their blood should the National Executive Committee of the NPP proceed with the constituency elections.

“We are sending a strong message to Hon. Madam Cecilia Dapaah and her committee, that if she is the one who told the MP that only nine polling station elections are going to be conducted, as Yaa Asantewaa fought with her life for the Asante Kingdom, we the 900 delegates will fight to the last drop of our blood if the right thing is not done,” he stated.

They further stated, “we are sending a strong message to Hon. Cecilia Abena Dapaah that they would have to kill all of us before the nine (9) polling station elections are conducted.

If Madam Cecilia Dapaah, as an MP, wants to treat our case differently just to compensate her fellow MP, we will tell her that we voted for the MP and not for her. We will resist any attempt to compensate Hon. Bright Wereko-Brobby, who has lost credibility in the constituency but is now seeking his way through using mafia tactics.”

The NPP delegates further served notice to the party that if they stick to the fraudulent acclamations that were done in some of the polling stations, they would not allow any NPP-related elections to take place in the constituency.