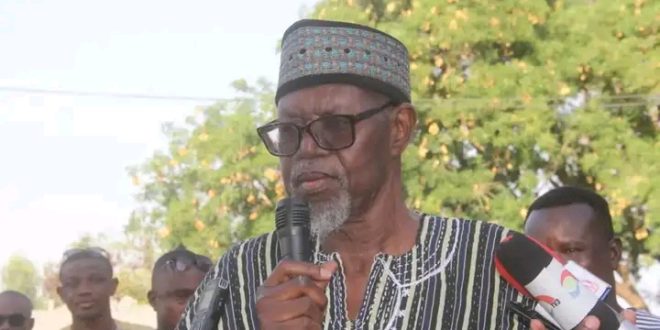 A former Member of Parliament for Zebila, John Ndebugre has passed on aged 72.

Mr. Ndebugre passed on at his residence in Zebilla on Friday afternoon, May 6, 2022.

It is unclear what caused his death, but family sources say, he was battling a short illness until his demise.

The body has been deposited at the mortuary of the Upper East Regional Hospital morgue for preservation.

The late politician and lawyer was known to be a vociferous person who shared strong views on pertinent national issues.

He served as PNDC Upper East Regional Secretary with renowned lawyer, Martin Amidu as his deputy at the time.

He pursued a degree in chemical engineering at the Kwame Nkrumah .University of Science and Technology and was subsequently called to the bar in 1988 after reading law.

I've known John Ndebugre for more than a decade. He was like a dad. Just a month ago, his sons came to my office and we all spoke to him on the phone from his base in Zebilla. He was one of the smartest and controversial lawyer/politician I've encountered and interviewed… pic.twitter.com/6ZwPY9b7Vy

A former Member of Parliament (MP) for Zebila in the Upper East Region,John Ndebugre has passed on.

He served in other capacities until he fell out with the late Jerry John Rawlings.
He left behind a widow and four children.

The private legal practitioner hails from Tinmonde in the Bawku West District of the Upper East Region.

Reacting to news of his death, the Member of Parliament for Zebilla, Cletus Avoka, extolled Mr. Ndebugre for his credentials.

“He has a very brilliant academic career. All those who know him can testify to his ability. He is very forthright. He has a lot of passion for what he does and what he believes in. He is a brilliant lawyer. I think the whole country has lost an illustrious politician,” Mr. Avoka said on Eyewitness News.

I'm Adwenpa-Hene |Blogger & Broadcaster Journalist. I am the CEO and manager of this noble website. I publish on Entertainment, Sports, Politics, Lifestyle, and Technology. You can also follow Us on : YouTube Channel - My Ghana Media TV, Facebook - MyghanaMedia TV , Twitter - @MyGhanamedia2 & Instagram - My Ghana Media TV. Email Address: [email protected] Contact Us: 0200818719
@@MyGhanamedia2
Previous Wontumi Accused Of Pending Mampong NPP Internal Elections As Court Places Injunction On It.
Next “It Is Too Early To Predict Whether We Will Finish Agenda 111 Project Or Not” – Health Minister