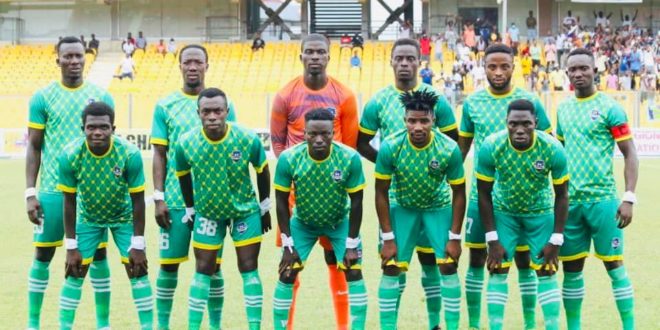 Nsoatreman FC gained promotion to the Ghanaian top-flight after beating Tamale City 2-1 in a game which lasted for 120 minutes after the regulation time had ended in a one-all draw.
At the end of the League season, Nsoatreman FC and Tamale City FC both had 71 points and even on head-to-head after winning their 1-0 at their respective home grounds.

Per the Division One League Regulations, winner of the play-off match will gain promotion to the Ghana Premier League.

The first department of the epic fixture failed to produce any goal as both sides had few incursions which they failed to make them count, pushing the first half to a goalless draw.

Back from the break, Nsoatreman FC warmed themselves into the game to open the score before the hour mark through Samuel Ofori.

Ofori snatched the opener for Nsoatreman FC with a brilliant strike on the 58th minute of the game.

Tamale City gained possession after conceding to pile an intense pressure on the Bono based club, their dominance over Nsoatreman FC earned them a penalty after Godknows Dzakpasu was fouled in the 18-yard box.

Striker Bismark Asare elected himself to convert the ball firmly into the back of goalkeeper Yaw Ansah’s net on the 65th minute of the game.

Both clubs could be found guilty for squandering the the goal glaring opportunities and free-kicks awarded to them in the last twenty minutes of the fixture as the entire duration ended in a 1-1 draw.

A 98th minute sumptuous strike from Charles Asante was enough to secure Nsoatreman FC a Premier League promotion for the 2022/23 season.

Samartex FC and Kotoku Royals FC have already qualified for the next season’s Ghana Premier League after finishing on top of the Division One League Zone two and three respectively.