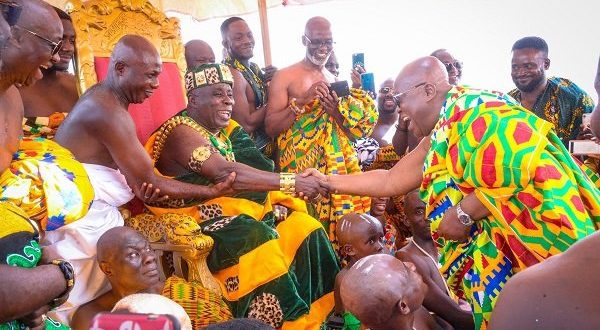 Akufo-Addo More About Legacy Than Riches; Learn From Him – Okyenhene Tasks Appointees

The Okyenhene, Osagyefuo Amoatia Ofori Panin, has urged Ministers of the Akufo-Addo government to eschew arrogance and focus on the President’s legacy.

According to the Okyenhene “if somebody gives you a position to do a particular work, all that you have to do is to serve , it shouldn’t have to be the case that after you have been appointed as a minister and the people call on you and you turn your back to them.”

The Okyenhene is worried that some appointees do not understand their duties.

“If you are appointed to be in particular position, you are a public servant. Nana Addo appointed you not because of your beauty or your intelligence but he appointed you to serve. Serving in Ghana is quite advantageous than elsewhere. When you become a minister, you are giving a house for free, 2 or 3 cars for free, you travel for free, you won’t pay for electricity, you won’t pay for fuel all that you are require to do is to help Nana Addo to serve but some of them don’t know this, so when you here them saying ‘ooh’ do you know who I am ? I say yes, you are a public servant that’s who you are,” Okyenhene fumed.

Okyenhene bemoaned the lifestyle of some of the appointees which he says contradicts the character of the appointer whose focus, he said, is legacy and not material wealth.

“You could be modest and still powerful. You could be humble and still powerful. Jesus Christ is epitome of service in humility. At a point he washed the feet of the disciples. If it were today and I were there, I would have been shocked and probably stopped him. But Jesus said, he among that wanted to be great let them serve .So there is power in service .It is not about money. The President that we all look after, finds a legacy more than any material wealth because for him material wealth is by-product.

He continued “Look at this Kufour’s NHIS that we are all benefiting, if he had not dreamt about it, would it have existed today ? Some people even rose against it, the same way people said all sort of things about Nana Addo’s free SHS but look at the benefit it will serve the country in 20 to 30 years to come. These are what we called responsible heads of household and responsible leadership, they do not think about today, they think about tomorrow”.

The Overlord of Akyem Abuakwa traditional area said this when the Chief Executive Officer of National Health Insurance Authority, NHIA, Dr. Bernard Okoe Boye paid a courtesy call on him at Ofori Panin Fie as part of his 3-day tour of the Eastern Region.

Okyenhene commended Dr.Okoe Boye for his commitment to serving Ghana.

Okyenhene urged government to review the condition of service of Medical Doctors to make them feel comfortable to help stop high brain drain among members of Ghana Medical Association.