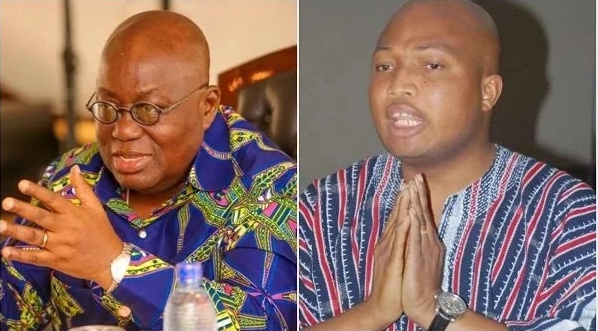 The Director of Communications at the Office of the President, Eugene Arhin says accusations by North Tongu MP, Samuel Okudzeto Ablakwa against President Akufo-Addo are mere propaganda to score political prominence.

Mr. Ablakwa on Thursday, June 23 unapologetically accused President Akufo-Addo of spending €480,000.00 on his recent trip to Belgium and Kigali for a Pan-African Vaccine Manufacturing Project.

Although the Office of the President had denied these claims in a statement, the North Tongu MP said there cannot be any “justification whatsoever for the grave insensitivity of President Akufo-Addo.”

But Eugene Arhin in a new statement on June 26 criticised Mr. Ablakwa; adding that the MP “provides no evidence or documentary proof whatsoever to back up his €480,000 cost claim, because he has none.”

“Once again, it is obvious that the Honourable Ablakwa finds these attacks on the President to be his pathway to political prominence through negative propaganda, and is determined to pursue this course, no matter how ridiculous and insulting his statements are.”

Eugene Arhin noted that Okudzeto Ablakwa’s accusations are not “well-intentioned” because his claims are just to “score cheap political points to incite public disaffection against the President.”

“Hon. Samuel Okudzeto Ablakwa states that “less endowed countries” continue to keep faith with their jets, and tries desperately to compare them with our presidential jet. Of course, they would. As the Ranking Member on the Committee on Foreign Affairs in Parliament, he should know that the presidential jets of “less endowed countries” in the West African Region, for example, are far superior to what Ghana, West Africa’s second biggest economy, can boast of.”

According to Eugene Arhin, the MP’s description of President Akufo-Addo’s travels as “meet me there” was a “cheap shot”.

He said the “meet me there” travels of the President have been of immense benefit to the country.

“It is important to put on record that the President’s trips since he assumed office in 2017, have been immensely beneficial to the country.

“The President’s so-called “meet-me-there” has brought the entire US Congressional Black Caucus and the Speaker of the US Congress to Ghana, in turn motivating Africans in the Diaspora to come to Ghana, where some have decided to make our country their second home.

Below is the full statement released by Office of the President