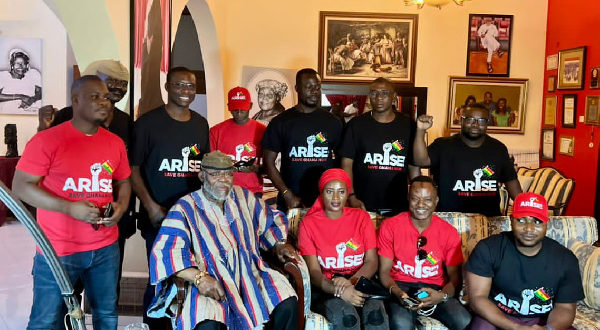 Arise Ghana To Police: Release All Images Of 12 Injured Officers

One of the leaders of the Arise Ghana, Mensah Thompson, has dared the Ghana Police publicly publish the images of the 12 injured officers.

This challenge comes after the Ghana Police noted that the protesters attacked some officers during the protest on Tuesday evening.

According to them, as a result, 12 of its officers have sustained various degrees of injuries.

In response, Mr Thompson stated that the police service can only provide evidence of one officer’s injury.

“When you go to the Facebook page of the Ghana Police Service where they posted their statement, they can only post a picture of one police officer who had an abrasion on his ears.

“I am daring the Ghana Police Service to release all the images of the 12 police officers they say were injured by Arise Ghana,” he uttered.

Speaking in an interview Joy FM monitored by MyGhanaMedia.com, he explained that “all the violence and mishaps witnessed today were all orchestrated by the police.”

He noted that the Police were deployed on the grounds and charged with the responsibility to protest the citizens; therefore, “this level of unprofessionalism won’t be accepted.”

However, the Police have also noted that the pressure group attacked them without provocation.

for more details play the audio below

On Tuesday, a pressure group, Arise Ghana, hit the streets of Accra to express displeasure over the worsening economic conditions in the country.

To have a peaceful demonstration, the Ghana Police Service deployed two mobile Police hospital units to assist the demonstrators and officers who might need medical attention during the protest.

The Inspector-General of Police (IGP), Dr George Akuffo Dampare, urged the officers deployed for the exercise to treat the protesters with respect and dignity.

But a standoff between the Police and some protestors led to the firing of tear gas and rubber bullets.

Meanwhile, Security Expert and Head of Research and Protocol Good Governance Promoters-Ghana, Ishmael Osei Ofori has condemned in no uncertain terms, the incidents of violence perpetuated against the Police by the Arise Ghana Demonstrators during an interview with Obuoba Ofori Amanfo on Maakye Moring Show.

Play the audio below for more details