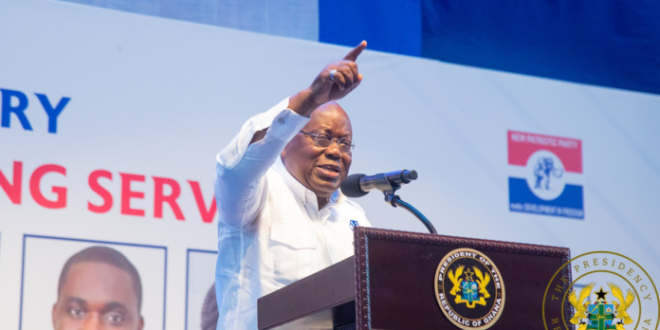 The Director of communications at the Office of the President, Eugene Arhin, has rubbished claims by a radio presenter, referred to as “Gh Mouthpiece” that she lost her job at Kingdom FM on the orders of President Nana Akufo-Addo.

The presenter claimed that Akufo-Addo sent a text message to her boss to fire her over a video that is putting pressure on the government.

In a Facebook post on Saturday (15 October 2022), Arhin said: “Anyone who knows President Akufo-Addo knows that he is not on Whatsapp, neither does he send text messages to anyone, let alone stoop so low as to demand that a journalist be dismissed from her employment.”

I have seen a story on Ghanaweb where a radio presenter, referred to as “Gh Mouthpiece”, claims she was dismissed from Kingdom FM on the orders of President Akufo-Addo. For the avoidance of doubt, this is nothing but a fabricated, baseless lie, simple as that.

According to her, “the President could not sleep throughout the night, and had texted him (Jonathan Amofah) at 1:00am. He (President Akufo-Addo) sent him the video I had recorded. My Director told me he was under pressure because of my video”

Anyone who knows President Akufo-Addo knows that he is not on Whatsapp, neither does he send text messages to anyone, let alone stoop so low as to demand that a journalist be dismissed from her employment. Indeed, I have spoken to the CEO of Kingdom FM, Jonathan Kwame Amofah, who has stated categorically that he has never received a text message from the President before, has never received any directive from the President to dismiss anyone, and goes on to describe “Gh Mouthpiece” as peddling nothing but falsehoods.

If this “journalist” wants to trend, she is free to do so, but she should be guided by the ethics of journalism, which are truth, accuracy and objectivity. As the President has always said, he prefers, on any day, the noisy, boisterous, sometimes scurrilous media of today to the monotonous, praise-singing, sycophantic one of yesteryear. He will not be the one to ask for the dismissal of a journalist who criticizes him.