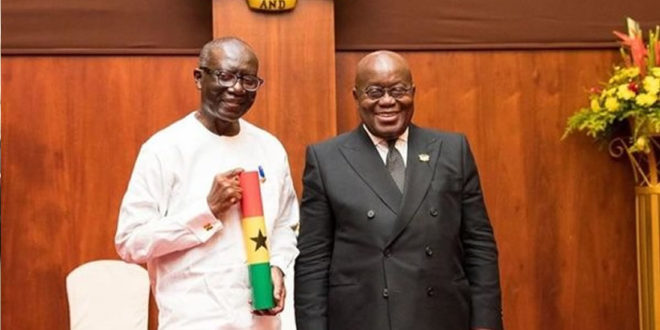 The Majority in Parliament has agreed to a plea by President Nana Addo Dankwa Akufo-Addo to have his ministers at the Finance Ministry stay on a little longer despite pressure from the caucus.

Some members of the Majority caucus on Tuesday, October 25 demanded the removal of the sector minister, Kenneth Nana Yaw Ofori-Atta, and the Minister of State at the Ministry, Charles Adu Boahen, as well as their deputies for the poor management of the country’s economy.

They threatened that they will have no business to do in Parliament for the government if this demand is not met.

“We are by this medium communicating our strong desire that the President changes the Minister of Finance and the Minister of State in the Finance Ministry without further delay,” Asante-Akyem North Member (MP) Andy Appiah-Kubi led the over 80 MPs.

“We want to serve notice, and notice is hereby served that until such persons as aforementioned are made to resign or removed from office, we members of the Majority Caucus here in Parliament will not participate in any business of Government by or, for the president by any other Minster.”

A meeting was subsequently called later Tuesday evening by President Akufo-Addo, who appealed for some time for his embattled ministers especially as Ghana is negotiating a deal with the International Monetary Fund (IMF) and the 2023 budget is also being compiled.

Majority Leader Osei Kyei-Mensah-Bonsu on Wednesday, in an interview with TV3‘s Roland Walker, promised to go back to the aggrieved MPs for a meeting and get back to the President.

On Wednesday, he released a statement on the outcome of the meeting with all the Majority MPs.

“After deliberations among the Majority Caucus today, Wednesday, 26th October, 2022, it was agreed to accede to the President’s plea.”

President Akufo-Addo, at an emergency meeting with leaders and members of the New Patriotic Party (NPP) Majority Caucus in Parliament on Tuesday (25 October 2022), expressed regret about the approach taken by about 80 of them in calling for the removal of Ken Ofori-Atta and Charles Adu Boahen as the Minister for Finance and minister of state in charge of finance, respectively.

At the meeting that was cordial but tense, both sides ended their discussions with a deeper understanding of each other’s standpoint, sources say, and with the common belief that the interests of the government, party and nation are paramount and need not be in conflict.

President Akufo-Addo, in a passionate, eloquent but sober manner, told the NPP MPs that he would have expected those among them calling for the removal of the two men to have come to him directly on the matter first.

There, he said, he could have also put his viewpoint and if they were not satisfied with his response then it would have been perfectly understandable for them to advise themselves accordingly.

He told them that Ghana is going through economic difficulties and the Office of the President is open to ideas from an important branch of the ruling party such as MPs on the best way forward. However, he said, the approach may matter as much as the message itself.
The President’s argument

President Akufo-Addo also made it clear to his MPs and the party delegation, led by National Chairman Stephen Ntim, during the meeting that his office has no record of any petition or request for a meeting on the subject matter by the MPs themselves, whether through the party leadership or the leadership of the Majority side in Parliament.

He indicated that he had been aware of murmurings, but the approach adopted took him by surprise and was not the best. An Asaase News source who attended the meeting, held also on Tuesday (25 October 2022) at Jubilee House, says the president described the resignation call as ill-timed.

There have been growing calls for the removal of the Finance Minister, in response to high levels of anxiety stemming from persistent economic challenges, exacerbated by the rapid depreciation of the cedi.

The timing of the dismissal call, President Akufo-Addo stressed, was suboptimal for the following reasons:

His government has 20 days more to present the 2023 Budget, which is intrinsically linked to the negotiations with the IMF. There is a need to reflect the priorities of the IMF negotiations appropriately in this critical Budget. The president called on his MPs to not lose sight of the importance of maintaining focus.
Ofori-Atta and Adu Boahen have been leading bilateral/multilateral negotiations to secure additional funding to support the Budget and Ghana’s development programme, in line with the NPP’s manifesto commitments.
The president was also clear that the ruling party could not afford any delay, either in concluding the recalibration of the country’s debt sustainability agenda or in securing the IMF package itself.

He was in no doubt about the duo’s determination to conclude the negotiations with the Fund, secure additional financing and finalise the 2023 Budget and appropriation to bring relief to Ghanaians. “You do not change a captain who is steering the ship out of a storm,” he stressed.

There is also concern about the likely negative reaction of the markets to new leaders who may not be privy to earlier discussions.

In spite of all the challenges, President Akufo-Addo asked for the two men, with their wealth of contacts and experience built up over the years and in their current jobs, to be allowed to conclude the Budget and IMF negotiations.

If, at the end of this, the vast number of MPs are still not happy, he said, he has no problem with listening to their concerns and taking appropriate steps to address these.

At a press conference held in the foyer of Parliament on Tuesday (25 October), Andy Appiah-Kubi, the MP for Asante-Akim North and spokesman for the group, demanded the resignation of Ken Ofori-Atta and Charles Adu Boahen over their management of the economy.

According to the group of MPs, they will not assist in any government business that involves the Ministry of Finance, or have any dealings with the Finance Minister or the minister of state for finance, until both men leave the government.

See also  Keep Faith With President Akufo-Addo, He Can Do It – Ofori-Atta Tells Ghanaians

“We have had occasion to defend allegations of conflict of interest, lack of confidence and trust against leadership of our Finance Ministry. The recent developments within our economy are of great concern to the greater majority of members of our caucus and our constituents,” Appiah-Kubi announced.

“The summary of our concern leads to the plea that the Minister for Finance, Ken Ofori-Atta, and the minister of state at the Ministry of Finance, Charles Adu Boahen, should be removed from office.

“Meanwhile, we want to serve notice that until such persons as aforementioned are made to resign or removed from office, we members of the Majority Caucus here in Parliament will not participate in any business of government by or for the president or by any other minister,” Appiah-Kubi told reporters, in a direct statement to the press.

“If our request is not responded to positively, we’ll not be present for the Budget hearing, neither would we participate in the debate,” Appiah-Kubi said.

I'm Adwenpa-Hene |Blogger & Broadcaster Journalist. I am the CEO and manager of this noble website. I publish on Entertainment, Sports, Politics, Lifestyle, and Technology. You can also follow Us on : YouTube Channel - My Ghana Media TV, Facebook - MyghanaMedia TV , Twitter - @MyGhanamedia2 & Instagram - My Ghana Media TV. Email Address: [email protected] Contact Us: 0200818719
@@MyGhanamedia2
Previous ‘I Am Still Older Than You’ – Speaker And Majority Leader Trade Words In Parliament
Next Ghana: Today’s Newspaper Headlines; Thursday, October 27, 2022