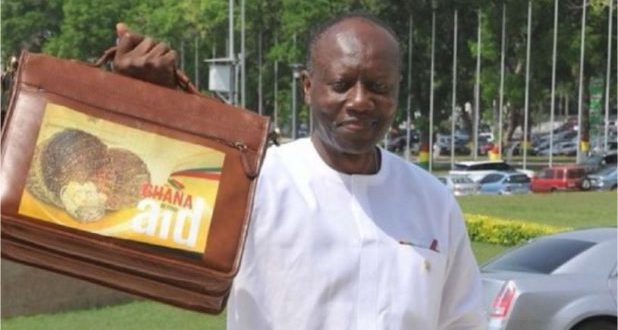 Finance Minister, Ken Ofori-Atta says he will present the 2023 Budget in Parliament next week.

The Minister’s comment is coming at a time when some Majority MPs have threatened to boycott the 2023 budget statement if he (Finance Minister) is not sacked.

In an interview with JoyNews’ Parliamentary Correspondent, Kwaku Asante shortly after he had testified before the Adhoc Committee hearing the censure motion, Ken Ofori-Atta said “yeah, expect so. That seems to be a weird question.”

The Journalist asked whether he will be the one to present the 2023 budget.

According to Ken Ofori-Atta, although the hearing so far has been cumbersome, he believes it is “democracy in play.”

I asked Finance Minister Ken Ofori-Atta if he expects to be the one to present the 2023 budget next week, he said he "expects so" despite 98 MPs from his party warning they will boycott if he's the one to do the presentation. #KenMustGo #JoyNews pic.twitter.com/3pq0PFxt8O

It would be recalled that the NPP MPs in a press conference on Tuesday, October 25 stated that they are displeased with the management of the economy under Ken Ofori-Atta.

“It’s not only the budget that we will boycott, we will no longer be a part of any government business. That is the position we have taken. It starts from now,” leader of the rebel NPP MPs, Andy Appiah-Kubi, said.

“Ofori-Atta is not the only one with knowledge, he must go. I can assure you, we will not backtrack on our decision. If the President refuses to sack him, it’s up to him,” he added.

But the Effutu MP said the postponement is due to “unforeseen development.”

I Have Not Invited NPP MPs Calling For Ofori-Atta’s Exit – J.A Kufuor

“The Minister responsible for Finance on the authority of the President of the Republic, is scheduled to present the budget statement for the year ending 31st December, 2023 in accordance with Article 179 of the 1992 Constitution on Thursday the 24th of November, 2022,” he said on the floor of the House.

Mr. Ken Ofori-Atta on Friday appeared before the Adhoc Committee hearing the censure motion as a witness to give his testimony on the allegations on which the Minority wants him out of office.

Ken Ofori-Atta To Ghanaians : “I Feel Your Pain; Am Truly Sorry’

The Minister apologised to Ghanaians for the hardship being suffered in recent times but denied claims of mismanaging the economy and subjecting Ghanaians to the economic woes.