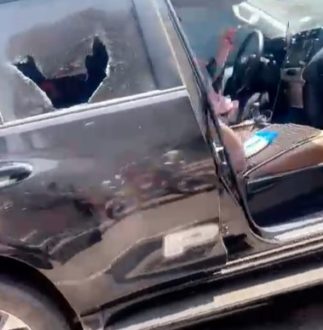 The Police say it has shot dead two and arrested one of the armed robbers who attacked and shot a woman at Caprice in Accra last Friday.

According to the Police, this follows “sustained police intelligence operations” since the day of the incident.

In a press statement issued on Monday, December 12, the Police said its intelligence operations led them to the hideout of the robbers.

“Police have shot dead two armed robbers and arrested one in connection with the robbery attack at Caprice in Accra on Friday, December 9, 2022, where a female victim was attacked, shot and robbed.

“Sustained police intelligence operations since 9th December 2022, took the fight to the robbery gang at their hideout (name of location withheld for now).”

The release added that the robbers engaged the Police in a gun battle which led to the killing of the two.

It added that one of its personnel sustained a gunshot injury in the process.

“The robbers engaged the police in a shoot out and in the process, two were shot dead and one was arrested.

“One police officer sustained a gunshot injury to his thigh and is receiving medical attention,” portions of the statement added.

Meanwhile, the release concluded that “Police intelligence operations continue to get the rest of the gang members arrested.”

Read more from the attached link;https://t.co/Dy8NOtcnI3

A viral video of the robbery attack shows the woman was attacked in her vehicle while in traffic at Caprice, near Kokomlemle.
2 robbers shot dead, one arrested in Caprice robbery

The victim was shot in the hand and her vehicle’s rear door glass was also destroyed.