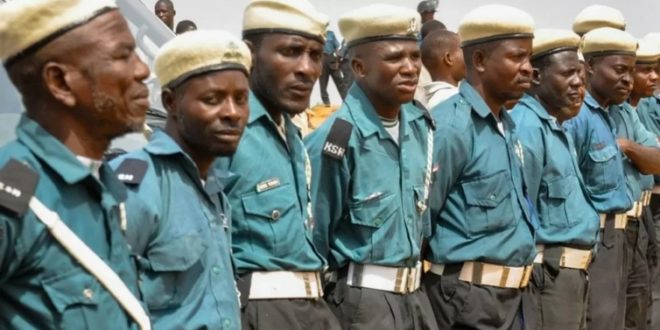 The Islamic police force in northern Nigeria’s main city has arrested 19 Muslims, accusing them of attending the wedding of a same-sex couple.

The force raided the marriage ceremony in Kano after a tip-off, its spokesman Lawal Ibrahim Fagge said.

The couple, who had not yet taken their vows, managed to flee and police were searching for them, he added.

Kano has a majority Muslim population, where an Islamic legal system operates alongside secular law.

Homosexual acts are illegal under both legal systems in the whole of Nigeria, where those living in the north are mainly Muslim and people in the south are largely Christian.

Kano’s Islamic police force is popularly known as the Hisbah and enforces a strict moral code.

Mr Fagge told the BBC that the police force did not intend to punish the 15 male and four female wedding guests arrested during the raid on Sunday.

Instead, the group – which he said included gay people and cross-dressers – was undergoing “counselling”, and their parents or guardians had been urged to come forward.

“We’ll explore the avenue of change before we charge them in court. First we counsel them, and involve the parents and we hope they change their lifestyle,” the Hisbah spokesman said.

Kano’s Islamic courts have never convicted anyone for being gay.

Mr Fagge said that 18 people who attended a similar wedding ceremony last year had been released after signing a document that gave an “undertaking that they would change their lifestyle”.

Rights groups in Nigeria have long campaigned for gay rights to be respected, but there is strong opposition to it in a country where many Muslims and Christians uphold conservative religious values.

I'm Adwenpa-Hene |Blogger & Broadcaster Journalist. I am the CEO and manager of this noble website. I publish on Entertainment, Sports, Politics, Lifestyle, and Technology. You can also follow Us on : YouTube Channel - My Ghana Media TV, Facebook - MyghanaMedia TV , Twitter - @MyGhanamedia2 & Instagram - My Ghana Media TV. Email Address: [email protected] Contact Us: 0200818719
@@MyGhanamedia2
Previous ‘Why Are We Entertaining Such Nonsense’ – NPP MP On Ofori-Atta’s Continued Stay In Office
Next Sack NDC’s Asiedu Nketiah From Parliamentary Service Board- NMC Chair