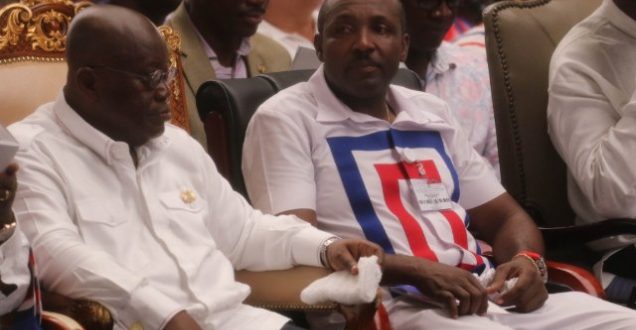 ‘Daddy, Are You John Boadu Or Akufo-Addo?’

There is no argument that being a politician is a very arduous task. But the burden triplicates if you are the General Secretary of the governing party, the New Patriotic Party (NPP).

The demanding aspects of the role took a tremendous toll on the family life of John Boadu. Yet, he had to lose the position before he realised it.

“I was missing a lot, I didn’t even know,” he told Emefa Apawu on JoyNews’ The Probe on Sunday.

Speaking publicly for the first time after his defeat, Mr Boadu said prior to losing his former job he had little interaction with his youngest son to the extent that his seven-year-old didn’t know his name.

“Weeks ago, my son asked me ‘Daddy are you John Boadu or Nana Akufo-Addo?’ I was confused and asked him ‘Why are you asking me such a question?’

He said one of his mates asked him whether his father is John Boadu or Nana Akufo-Addo. So I asked him what answer he gave and my son said he doesn’t know.”

Mr Boadu noted that he couldn’t blame the child for not knowing his name.

According to him, his busy schedule left him with little or no time to spend with his son.

“He [my son] sees me once in a while. In the morning some people come to my house, we have a meeting, and we leave and return in a week’s time. Sometimes I return and he’s gone to school so there was little interaction. So I can only imagine what my elder children went through,” he recounted.

Although Mr Boadu’s -year-old sought to get clarity from his father, the politician saw the innocent question as a wake-up call to up his fatherly duty roles in his son’s life.

In view of that, Mr Boadu says he is glad to be relieved of “the kind of burden” that came with the General Secretary position.

While admitting that he sometimes misses his former job, he noted that now he has time to bond with his family,

“If it wasn’t for this defeat I wouldn’t have known,” he said amidst shock.

“So I think all these things are God’s plan to shape you in order for you to understand some things. Now I help him with his homework, I go to his PTA meetings, I get in touch with teachers and I think that we need that kind of atmosphere as well,” he noted.

I'm Adwenpa-Hene |Blogger & Broadcaster Journalist. I am the CEO and manager of this noble website. I publish on Entertainment, Sports, Politics, Lifestyle, and Technology. You can also follow Us on : YouTube Channel - My Ghana Media TV, Facebook - MyghanaMedia TV , Twitter - @MyGhanamedia2 & Instagram - My Ghana Media TV. Email Address: [email protected] Contact Us: 0200818719
@@MyGhanamedia2
Previous John Boadu: I Blame Myself For My Defeat
Next Dr. Bawumia Worships At Rev. Owusu Bempah’s Church