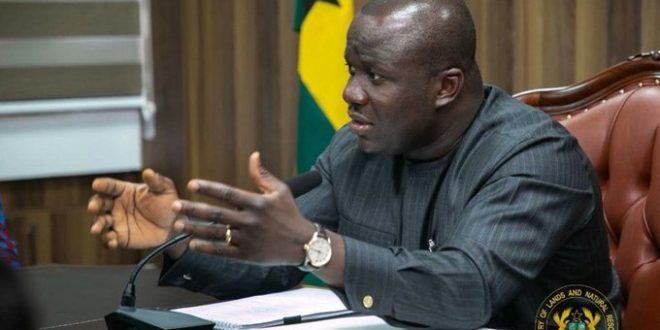 Spread the love
Dear Mr. Mahama,
I have read, Sir, with utmost dismay, your Facebook post regarding the comments made by the President of the Republic, H.E. Nana Addo Dankwa Akufo-Addo, in Eastern Region, when he addressed the 28th National and 16th Biennial Congress of the National Union of Catholic Diocesan Priests’ Association (NUCDPA).
Ordinarily, I would have no need to respond to matters you post on your Facebook page. But, due to the gross misinformation and political spin contained in the said post, as well as the attempt to disparage my integrity and that of the President in respect of this matter, as Minister responsible for Lands and Natural Resources, I deem it necessary to set the records straight. My response will, therefore, focus on the facts, and I will endeavour not to respond to the political spins contained in the said post. The unimpeachable facts relating to this matter are as follow:
1. sometime last year, there were allegations levelled against Akonta Mining Ltd that it was engaging in some mining activities in the Tano Nimiri Forest Reserve;
2. although the company had applied for a mining lease over a portion of the Forest Reserve, the application had not yet been determined. I, therefore, directed the Forestry Commission to investigate the matter, and ensure that the Company does not carry out mining activities in the Forest;
3. the Forestry Commission moved in quickly and cleared the forest of all alleged illegal activities;
4. President Akufo-Addo had been invited as a Special Guest of Honour at the NUCDPA Congress, where he spoke about strengthening State-Church collaboration;
5. at the said Congress, a specific question was asked by the Chairman of the occasion regarding illegal mining activities by Akonta Mining;
6. the President in response stated categorically that “Akonta Mining is not engaged in any illegal mining anywhere in Ghana AS WE SPEAK”;
7. the President was speaking about the state of affairs at the time he made the comment, and went ahead to add that Government, through the Ministry of Lands and Natural Resources and the Forestry Commission had, with the assistance of the military, cordoned off all Forest Reserves in the country, and rid them of illegal mining activities at the time he was speaking, and that Government was working to ensure that the situation remains permanent;
8. the comments by the President in no way relates to past or future activities of Akonta Mining, and cannot, by any shred of imagination, be deemed as exonerating the company from any past activities or interfering with any ongoing investigations;
9. as it is public knowledge, the allegations of illegal mining by Akonta Mining Ltd are being investigated by state institutions responsible for such investigations, the Ghana Police Service and the Office of the Special Prosecutor;
10. when I received the report from the investigations conducted by the Forestry Commission, pursuant to my directive, I forwarded the report to the Ghana Police Service, through the Minister for Interior, to assist them in their investigations;
11. the Criminal Investigations Division (CID) of the Police Service has subsequently written to me requesting some further information, which I have provided;
12. the Office of the Special Prosecutor, in its Half Yearly Report dated 31st December, 2022, also states that the Office is currently investigating activities of Akonta Mining and other companies in respect of the said allegations;
13. officials of the Ministry of Lands and Natural Resources are collaborating with these state institutions to conduct their investigations and take the necessary actions;
14. the President, mindful of these ongoing investigations, refrained from speaking on past activities of the company which are under investigations by the state agencies. Indeed, but for the specific question posed by the Chairman of the occasion, the President would not have mentioned Akonta Mining at all;
15. I, also, want to put on record that no one, and absolutely no one, compelled me to issue the Press Statement on Akonta Mining which was issued following the allegations of their activities in the Forest Reserve. Neither has the President called any official of Akonta Mining to “appease” them on the action taken by Government. These claims, if they were indeed made, as you suggest, are, obviously, false and a figment of peoples’ own imagination; and
16. as reiterated by President Akufo-Addo at the Congress where he spoke, “Government is determined to win the fight against galamsey, no matter the cost and effort.” Under his distinguished and outstanding leadership, we are committed to doing this with the highest standards of transparency, integrity, and utmost good faith in the public interest.
Sir, whilst I have the opportunity, permit me to assert, without a shred of equivocation that the record of President Akufo-Addo’s Government in the past six years of fighting corruption far surpasses the NDC’s eight-year record.
Needless to point out that President Akufo-Addo’s extraordinary funding of anti-corruption institutions, the establishment of the Office of the Special Prosecutor, which as I speak, is investigating this matter, the passage of the Right to Information Act, 2019 (Act 989), rapid investigations of allegations of corruption, and many more are testament to his remarkable record in the fight against corruption.
I have reluctantly come out to set these records straight due to the very unfair and unfortunate manner in which you have attacked the unblemished reputation and integrity of the President of the Republic, your successor.
Good Day Sir,
Samuel A. Jinapor, MP.
Minister for Lands and Natural Resources
Ministries
Accra
See also  GNAT To Government: Grant 20% COLA By End Of June