Breaking News
Home / GENERAL NEWS / Africawatch: When Are We Reading Another Exclusive On Akufo-Addo 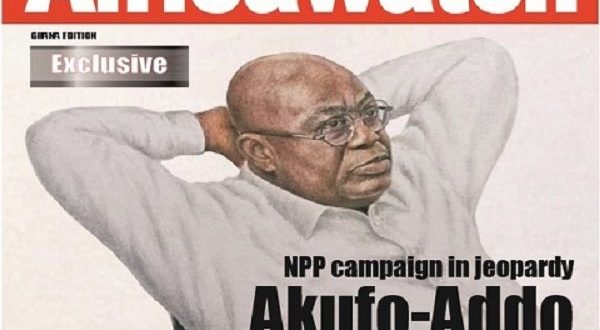 Africawatch: When Are We Reading Another Exclusive On Akufo-Addo

Africawatch magazine, in the lead up to the 2016 general election, became synonymous with Nana Addo Dankwa Akuffo-Addo, the magazine was a household name, because it became the nemesis of the then flagbearer of the New Patriotic Party (NPP).

If Daily Guide newspaper, was once upon a time referred to as Daily Rawlings, then without any equivocation, Africawatch Magazine, can rightly be Addo, one that really caught the attention of many which was widely circulated was the August 2016 edition, captioned “NPP Campaign In Jeopardy, Nana Addo Has Cancer”.

It was exclusive as it detailed what it claimed was wrong with the presidential candidate of the NPP. According to the magazine, the man who has yearned all his life to become the president of the country, is suffering from life-threatening diseases, including prostate cancer, acute kidney injury and an enlarged heart, all of which have serious implications for his political career.

In a special report written by Steve Mallory, he looked at how Akufo-Addo’s health issues will impact the 2016 election campaign and whether Ghanaians are prepared to go through another Mills syndrome, where illness impaired late president John Evans Atta Mills’ ability to steer the ship of state.

In the article Steve Mallory who is not medical professional stated that, medical illness is a very private affair and sharing that information is usually an individual decision, but when one is making a run for the presidency, just like Nana Akuffo-Addo of the New Patriotic Party, then the public must know the state of the person’s health, because of the massive responsibilities entailed by that position.

First of all, Africawatch or its editor, Steve Mallory’s credentials does not equip them to discern the health of an individual by their appearance. You cannot make a credible determination on the basis of someone’s exterior and demeanor. There is no such science. A physician needs to examine a shrewd politician to prove the true condition of their health.

With the wide plenitude of information that flies around, especially about political opponents, as journalists we sometimes have to be guarded by intuition, commonsense and rationality, or else we might ship into sweeping, dangerous judgment.

With the conditions of Nana Akufo-Addo, as reported by Steve Mallory, he was a dead man walking, nobody could have survived these ailments, yet the man is hale and healthy more than five years after becoming president.

It is obvious from the apparent inability of Africawath magazine to continue publication is that, they had one job to do and that is to prevent Akufo-Addo from becoming president.

A lot has happened since he assumed the presidency, which merit publication and exposure. The world needs to see the man for who he is, he hoodwinked Ghanaians into believing he was their Moses, who was going to take them to the promised land, but instead parochialism and nepotism, are now bywords for his administration.

The news cycle is furnishing cause for fears that corruption is killing the presidency of the presumed corruption slayer. We were told he is not corrupt and has never been corrupt.

His kitchen cabinet has been frothing poisons instead of the antidote. And his minimalist response to the scandals all but testifies that that he has enough hypocrisy in him to nurse in his inner circle the corruption plague he affects to be invested in eradicating from the body politic.

It would be oddly fitting if, Africawatch magazine, can keep holding Nana Addo, accountable as their job, need not stop, once the man is a president.

It is not what you start but what you finish.it matters not how you make an entrance, but how long you stay on the stage and when you leave.

Journalists, they say, are the ‘watchdog of the society’. If a common man on a street refuses to voice out, it is the duty of journalists to challenge any weak government to save the souls of people.

This is why, as journalists we are not only expected to do our work when it is convenient. Africawatch magazine, cannot go silence on us, whatever they started with Akufo-Addo, as candidate, needs not stop now that he is the president. As an opposition candidate, he owes the country nothing, but as president, he owes the country a lot or if you will everything, because, he collects our taxes and controls our sovereign heritage.

Steve Malory commands certain respect. He is held in high esteem for his muted radicalism, greatness of mind and expressed inimitable illuminated ideas.

In each of his published essay he sought to pass the message across in lucid prose leaving no one confused as to his direction or position. He is a damn good write no doubt, this is why silence is not an option at this stage.

If as an editor of a renowned magazine, and against the ethics of medical profession, he can claim to lay his hands on the medical records of Nana Addo, getting accurate information about how he is running the country, should be the easiest of all his assignments.

Akufo-Addo, might have won the battle by hoodwinking Ghanaians into given him the mandate, but certainly not the war. Steve Malory, owes a duty to his conscience, profession and Ghanaians to continue exposing the corrupt and oppressive regime, the fact that journalists are not safe in Ghana and has affected the country’s ranking in press freedom, is enough reason for Africawatch magazine, not be off the newsstands for long.

There is no convenient time for journalists to do their work, the clarion call is on everyday, despotic leaders are created when journalists who are the fourth estate of the realm, take a sit at the table with the first estate.

In the final analysis the prolific pen or keyboard behind a great international commentator, Steve Mallory, is progressively being demystified.

The unravelling is happening at a wrong time in our national history when patriotism is mostly becoming a scarce virtue or commodity.

But here on earth where the iniquity of man has systematically progressed there should not be forgiveness if the omission or commission is not apportioned or appropriated.

I'm Adwenpa-Hene |Blogger & Broadcaster Journalist. I am the CEO and manager of this noble website. I publish on Entertainment, Sports, Politics, Lifestyle, and Technology. You can also follow Us on : YouTube Channel - My Ghana Media TV, Facebook - MyghanaMedia TV , Twitter - @MyGhanamedia2 & Instagram - My Ghana Media TV. Email Address: [email protected] Contact Us: 0200818719
@@MyGhanamedia2
Previous WACCE Report – Ghana Has Been So Close To Terrorism
Next NDC Constituency’s Executive Dies In Road Accident After 3 Days Of His Wedding