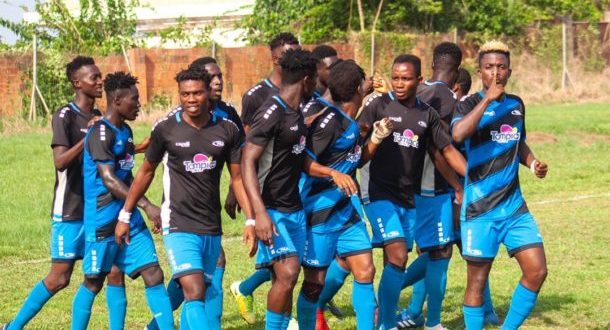 Information reaching indicates that the newly promoted Ghana Premier League side,  Kotoku Royals FC, have been dragged to the Ghana Football Association’s Disciplinary Committee for allegedly falsifying the registration of one of their players and using the same in their game against Tema Youth, which aided their qualification to the top division.

According to documents sighted by Citi Sports, whistleblowers, who brought the complaint before the Disciplinary Committee, want Kotoku Royals “expeditiously investigated for compromising the loyalty, competitiveness, integrity, and sportsmanship of the game of football”.

The Akyem Oda-based team gained promotion to Ghana’s elite division last week after holding Tema Youth to a goalless draw in the crucial last game of the season in Zone 3 of the Division One League.

Rivals Liberty Professionals, who went into the last day trailing Royals by one point, failed to win against Susubribri, handing promotion to the Akyem club.

But it appears their qualification could be jeopardised by allegations of fraud brought against them by whistleblowers acting on the dictates of Article 9(2) and 16(1a) of the GFA Statutes 2019.

The whistleblowers contend that Fawaz Ali is registered as a player of Kotoku Royals on the Ghana FIFA Connect system with 22nd October, 1995 as his date of birth, with FIFA ID no. 10FP419.

But they strongly believe the same player was previously registered with Kotoku Rush Soccer Club with the name GOMO ALI; 22nd October, 2000 as his date of birth and with FIFA ID no 1E0TXT0.

They claim FAWAZ ALI is the same as GOMO ALI, and accused Kotoku Royals of deliberately falsifying documents to the effect of changing the player’s name and date of birth in order to “deceive the football public”.

The Disciplinary Committee are under obligation to investigate the allegations against Kotoku Royals, and if found guilty, the club could cop severe punishment, including, but not limited to losing their status as a Premier League club.

But according to data found on the portal of the Ghana Football Association, this alleged case of Kotoku Royals was not filed in the list of appeals of the GFA Disciplinary Committee.

DOL Judicial Information: 2 cases each before the Disciplinary and Appeals Committees

After Matchday 30 spherical of matches within the 2021/22 Division One League, the GFA Disciplinary Committee has obtained two protest cases.

Both protests have been despatched to the Respondents for his or her written responses before the Disciplinary Committee adjudicates the respective cases.

Meanwhile, Kwaebibirem United FC has appealed in opposition to the protest case received by Inter Allies FC to the GFA Appeals Committee.

The Appeal case between Wassaman FC and Basake Holy Stars FC can also be pending before the Appeals Committee.