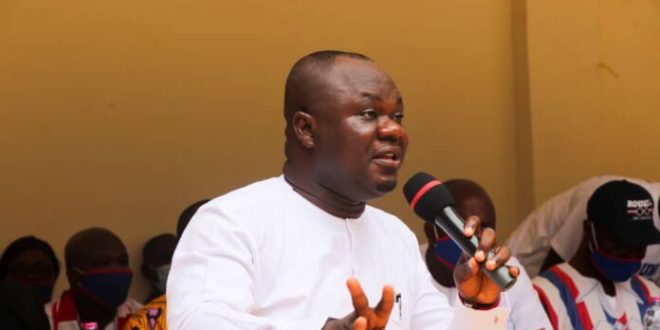 The Eastern Regional Communications Director for the ruling New Patriotic Party (NPP) Evans Osei Yeboah popularly known as Chooboi has sent a strong signal to the main opposition National Democratic Congress to desist from any attempt to organize its members to boo at the president.

According to him, the NDC is behind all the scenes recorded in the Ashanti Region when the president was booed during his tour in the area.

The president is expected to begin his three-day tour of the Eastern Region on Friday 21st October 2022 and ends on Sunday.

During his tour, he will be engaging in several activities which include the commissioning of Ultra Modern 78million Science, Technology, Engineering, and Mathematics (STEM) Senior High School at Abomosu in the Atiwa West District.

Speaking on the Agoo FM morning show, Evans Osei Yeboah said, the National Democratic Congress (NDC) should not interfere by organizing people to boo the president adding that security officers are ready to put things under control if they should make such a move.

According to Kofi Mire, it is shocking to see the itinerary of the president’s visit to the Eastern Region without his intention to inspect the Nkawkaw Sports Stadium.

He, therefore, tasked leadership in Kwahu to ask the president to visit the site adding that, the state of the sports stadium is not encouraging.

Currently, there is ongoing work for the construction of the Sports Stadium, after two years of sod cutting.

Construction of the Nkawkaw Sports Stadium has not yet experienced improvement, and sports fans and residents in Kwahu have expressed worry over how the government is not showing commitment to completing the project.