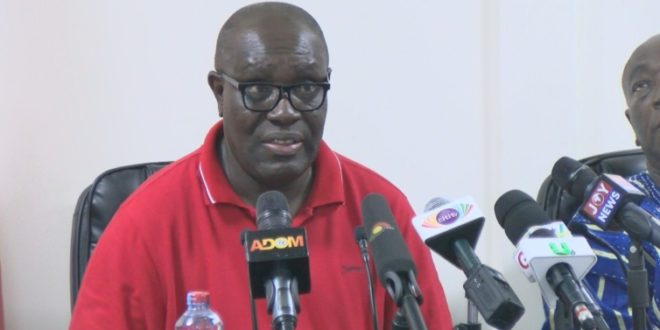 The Trades Union Congress (TUC) has rescinded its plan to embark on an indefinite nationwide industrial action from December 27.

The move was for the Union to demonstrate its opposition to earlier plans by the government to include pension funds in the debt exchange programme.

The union has also cautioned the government against any future plans in that regard.

The planned industrial action followed a one-week ultimatum given by Organized Labour for the government to ditch its decision to rope in pension funds in the debt exchange program or risk a nationwide strike.

But following the government’s decision to exclude the pension fund from the program, Secretary General of the Trades Union Congress (TUC), Dr. Yaw Baah at a news conference said the planned industrial action is effectively cancelled.

The workers union has also promised to work with the government to create macroeconomic stability in the country.

Addressing a hurriedly called news conference, the Secretary General of the TUC said “together we have reached a deal that we think is in the interest of this country.”

“There’s no way that such a thing should happen again. We have promised them (government) that we will continue to work together as social partners so that our country will get back to the stability that will benefit all of us”

Dr. Baah credited the success chalked against the government to the united front of the labour union.

He used the platform to call on members to “go to work” even on the intended strike date because their demands have been met.

It remains to be seen where government will focus next following the failed attempt on the pension funds.