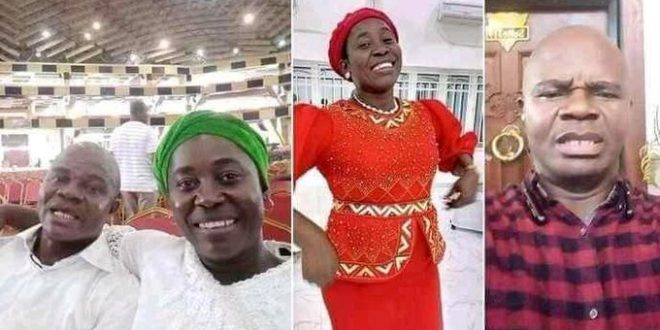 Following the death of Popular Nigerian Gospel Singer, Osinachi Nwachukwu at an Abuja hospital reports have it the alleged killer of the minister who is alleged to be her husband Pastor Peter Nwachukwu has been arrested.

Osinachi, 42, died last Friday 8th April, 2022 at an Abuja hospital after she allegedly suffered from domestic violence from her husband.

A Facebook is known as Bar. Chidinma shared her story saying the singer’s husband has been arrested in connection with her death.

Osinachi who was allegedly killed by her husband after she was beaten and kicked in her chest was rushed to the hospital and was placed on life support for some days before she finally died yesterday.

The post shared explained that Osinachi spent five days on life support at the hospital after her husband kicked her in her chest.

The said Bar. Chidinma was a friend of the late singer and she said confessed to her that she was been abused and maltreated by her husband. She also said, Min. Osinachi Nwachukwu was advised to leave the marriage but she said: “if not for the church and what people will say, I would have left this marriage.”

The singer’s death was attributed to throat cancer. However, there are reports that Sister Osinachi died as a result of domestic violence and constant batteries from her husband.

The Vanguard’s Police source indicated that police operatives, Sunday arrested Mr Nwachuku and that investigation has commenced into the singer’s death as a result of alleged domestic violence.