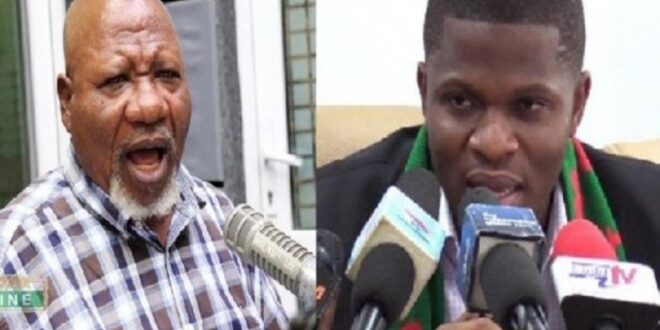 Bernard Allotey Jacobs, a former Central Regional Chairman of the National Democratic Congress has criticized the party’s communication officer for his attack on minority members of parliament.

Following the approval of some ministerial nominees of President Akufo-Addo, the National Communications Officer of the NDC, Sammy Gyamfi, took to social media to lash out at the leadership of the minority for prioritizing their personal interest at the expense of the party’s.

Sammy Gyamfi was unhappy that in the vote to decide the approval or rejections of Kojo Oppong Nkrumah, Dr Akoto Afriyie and Mavis Hawa Koomson as ministers for Information, Food and Agriculture and Fisheries and Aquaculture respectively, some members of the NDC caucus in parliament voted in favour of the nominees.

The Speaker of Parliament, Alban Bagbin, was not left out in the attack that, according to reports, ruffled feathers in parliament.

“Comrades, the betrayal we have suffered in the hands of the Speaker of Parliament, Rt. Hon. Alban Bagbin, the leadership of our parliamentary group, particularly Hon. Haruna Iddrissu and Hon. Muntaka Mubarak, and dozens of our own MPs, is what strengthens me to work hard for the great NDC to regain power,” portions of his post read.

Allotey Jacobs in a response on Adom FM slammed Sammy Gyamfi for suggesting that the nominees should not have been approved.

He questioned if Sammy Gyamfi wanted the MPs to hold the country to ransom by not approving the nominees.

“You want the country to standstill when you have a government in place and the leadership of the party that won the election has been sworn in. You want to say that his ministers should not be approved. People should learn. We are building a nation; we are not worshipping personalities,” he said.

I'm Adwenpa-Hene |Blogger & Broadcaster Journalist. I am the CEO and manager of this noble website. I publish on Entertainment, Sports, Politics, Lifestyle, and Technology. You can also follow Us on : YouTube Channel - My Ghana Media TV, Facebook - MyghanaMedia TV , Twitter - @MyGhanamedia2 & Instagram - My Ghana Media TV. Email Address: [email protected] Contact Us: 0200818719
@@MyGhanamedia2
Previous We’ll Kick Against Agyapa If Old Deal Is Brought Back To Parliament –Minority
Next TINs, SSNIT numbers To Be Phased Out Gradually For Ghana Card – NIA Boss