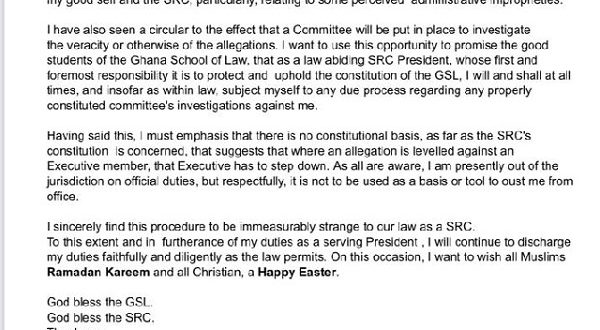 The President of the Students Representative Council (SRC) of the Ghana Law School, Wonder Victor Kutor, has fought off a directive for him to step aside over allegations of financial impropriety levelled against him.

Mr. Kutor is currently being investigated by an independent body over the purchase of a vehicle that bears his name for the SRC.

The Executive Committee has, therefore, asked him to step aside pending the outcome of the investigations.

However, Mr. Kutor in a statement has said he finds the procedure immeasurably, adding there is no constitutional basis in the SRC law that an executive steps aside when being investigated.

“As we are all aware, I am presently out of the jurisdiction of official duties but respectfully, that should not be used as a basis or tool to oust me from office,” he bemoaned.

In view of this, he says he will continue to discharge his duties faithfully and diligently as the law permits.

However, he has pledged to subject himself to all investigation processes.

He denied the conflict of interest claim in the procurement of a car, as well as using his personal company to run a mobile money centre and diverting funds.

The management of the Ghana School of Law has since moved to investigate the SRC over the allegations.

Speaking on Eyewitness News, Mr. Kutor admitted that the SRC purchased the used Toyota Corolla at 62,000 from a company he used to be the sole proprietor of.

But he said he had declared his affiliation to the company and also indicated that while he had appointed the people on the procurement team, “we expect fairness.”

“I am not a member of the SRC procurement committee. I do not sit on the committee,” he also noted.

On the claims that he was running an SRC-owned Mobile Money business with his company name and diverting proceeds from the business for his own personal use, Mr. Kutor said all he did was to donate his merchant SIM to the endeavour

“All the proceeds, we said after six or seven months the person will make an account of the proceeds, and we will pay to the SRC account, so what have I done wrong?”

“This pettiness should stop. Everybody knows my lady at the law school… My girlfriend is a student at the school of law. She is not the one doing the momo business,” Mr Kutor stated. 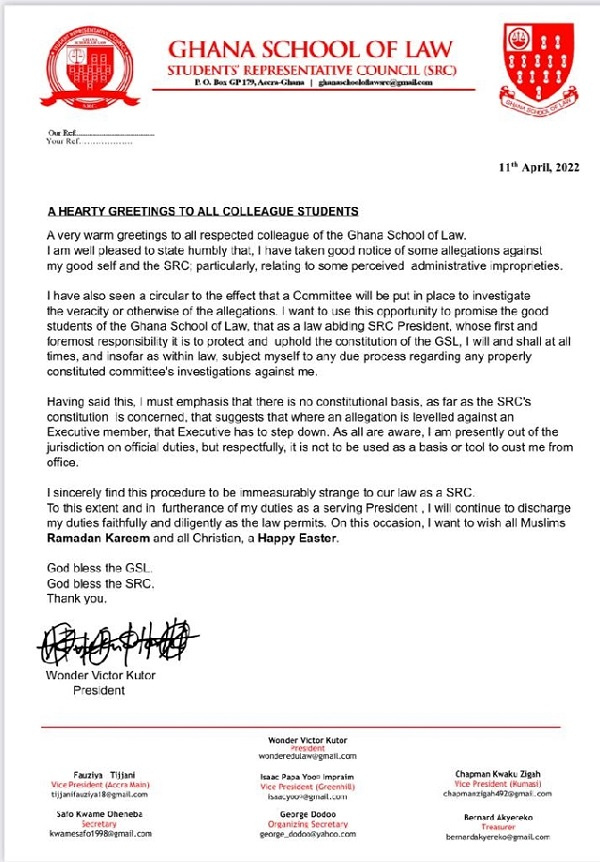