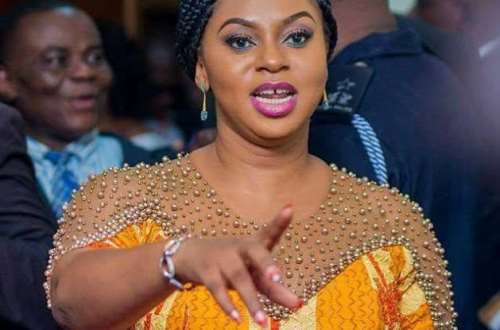 The lawmaker for Tamale Central, Ibrahim Murtala Mohammed has claimed that the governing New Patriotic Party (NPP) has sent a delegation to beg the dismissed Minister of Gender, Children and Social Protection, Sarah Adwoa Safo because she has threatened to speak out on what happened within the party as far as she is concerned.

Murtala made the claim on the New Day show with host Berla Mundi on TV3 Wednesday August 3.

“They have sent emissaries to beg Adwoa Safo because she is threatening to speak out,” he said but did not give further details when challenged by Berla to substantiate his claim.

Earlier, another National Democratic Congress Lawmaker, Samuel Nartey George who represents the people of Ningo Prampram said he was ready for the fireworks that may ensue between the Dome-Kwabenya Member of Parliament Sarah Adwoa Safo and her party following her removal from office as Minister.

In a tweet on Friday July 29, he said “If @AdwoaHon decides to speak, would the Majority and the NPP survive the tsunami it would cause? Are they really ready for the inquest? As for me, I am ready for the fireworks”.

If @AdwoaHon decides to speak, would the Majority and the NPP survive the tsunami it would cause? Are they really ready for the inquest? As for me, I am ready for the 'fireworks'. 🦁

See also  NPP Elections: Vote Out Wontumi If You Want To Retain Power In 2024 - NPP Told

She has been out of the jurisdiction for over one year.

She was one of the three NPP MPs who were hauled before the Privilege’s Committee for absenting themselves from Parliament without permission.

The others were Kennedy Agyapong, MP for Assin Central and Henry Quartey Ayawaso Central.

The Committee met Ken Agyapong and Henry Quartey however, could not meet Adwoa Safo because she was out of the jurisdiction.

With regards to Hon Sarah Adwoa Safo, in spite of all the efforts made to invite her to attend upon the Committee, the Hon Member did not appear before the Committee to provide the reasons for her absence from the House without written permission for more than the fifteen Sittings threshold.

“By the provisions of Article 97 (1) (c) of the 1992 Constitution, the onus is on Hon Sarah Adwoa Safo to provide a reasonable explanation to the Privileges Committee why she shall not vacate her Seat, for having absented herself for forty-two (42) Sittings, during the period under consideration.

“The above notwithstanding, the Majority, was of the view that, Hon Sarah Adwoa Safo failed to take advantage of the numerous opportunities and facilities offered her to provide reasonable explanation to the Committee with regard to her absence without leave.

“Therefore, pursuant to Article 97 (1) (c) of the 1992 Constitution and the Court of Appeal decision in the case of Professor Stephen Kwaku Asare v the Attorney General & 3 Ors, the Dome-Kwabenya should be declared vacant.”

But the Speaker of Parliament Alban Bagbin, said he would not, in a rush, give a ruling on the recommendations made by the Privileges Committee.

See also  Ashanti Region: The Love We Had For NPP Is Gone – Kwabre East Youth

He therefore deferred his decision until resumption of sitting from break as Parliament rises today July 28.

Addressing the House on Thursday July 28, Mr Bagbin said he needed time to produce a reasoned written ruling on the matter.

“Honourable Members, I have consulted the old lady, the old lady has given me an advise and I think that advise is correct. The issue raised by the Majority Leader is both of substantive and procedural law.

“I need time to submit to this house a reasoned, written ruling. I cannot in a haste of today, give you the ruling. In the circumstance, I will urge this House for us to call it a day.”