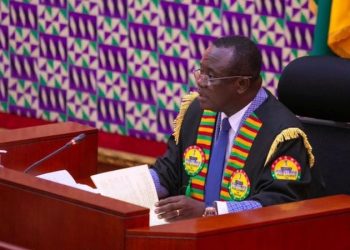 Joe Osei-Owusu: ‘A Deputy Speaker Is Not A Speaker, I’m An MP’

The First Deputy Speaker, Joseph Osei-Owusu, insists that he was not wrong in associating himself with the Majority side to approve the 2022 Budget Statement and Economic Policy of the Nana Akufo-Addo government on  Tuesday, November 30, 2021.

The First Deputy Speaker included himself in the total number of Members of Parliament (MPs) in the House before having the motion for the rescission of the rejection of the 2022 Budget moved on Tuesday.

This upset the Minority in Parliament, who insisted that the move is in clear breach of the parliamentary standing orders.

Following a lengthy debate on the motion on Wednesday,  December 1, 2021, after the Minority in Parliament moved a motion for the House to set aside the approval of the budget, the First Deputy Speaker in his ruling explained that per the Constitution and the Standing Orders of the House, he together with the Second Deputy Speaker are Members of Parliament, but only assist the Speaker of Parliament when the need arises.

“I have not heard anything here today [Wednesday] which was not discussed yesterday [Tuesday]. All the arguments today were practically the arguments made yesterday [Tuesday]. There are a few matters which I wish to clarify that first, it must be clear that a Deputy Speaker is not a Speaker. Indeed, article 96(1) of the constitution says, and I quote there shall be two deputy speakers of Parliament who shall be elected from the Members of Parliament and to contrast that to Mr. Speaker is not a Member of Parliament.

“I am a member of Parliament the Second Deputy Speaker is also an MP and our role is to assist the Speaker in managing the house. So any attempts to read and interpret the constitution to include the deputy speakers is a misreading” he said.

He thus threw out a motion by the Minority requesting for the approval of the 2022 budget on Tuesday, November 30, 2021, to be set aside.

But the Minority in parliament disagreed with the Speaker because, according to them, the First Deputy Speaker should have put their motion to a vote instead of passing a ruling himself.

See also  Privileges C’tee Member To Dome-Kwabenya MP : Don’t Force Us To Table A Motion To Expel You, Resign Honourably

As a result of a heated debate that nearly ended in fisticuffs in the chamber, the Speaker suspended sitting for an hour.

See also  God will judge The prophets of Ghana , They Have Sex In Their Offices - Prophet Kofi Oduro
Joseph Osei-Owusu 2021-12-01
Adwenpa-Hene