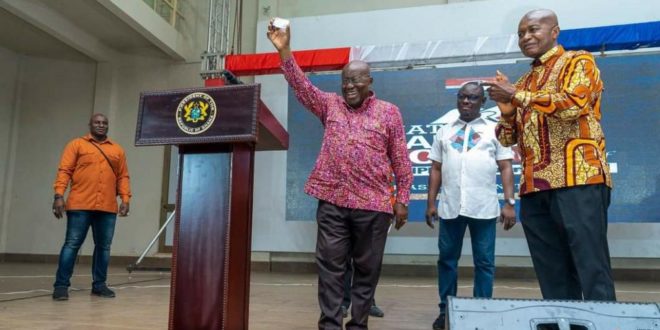 The switch to a new biometric or electronic membership card from this year is to help in early identification, data keeping and proper management, among others.

The launch of the new membership card forms part of the party’s drive to help register more members to solidify its chances of retaining power in the 2024 general elections.

It has features which will allow all members automatically hooked onto a centralised system for easy identification.

Speaking at the launch, President Akufo-Addo, whose membership card was handed to him by the National Chairman of the party, Stephen Ayesu Ntim, commended the initiative by the national executives of the party.

The move by the party, according to him, will help to consolidate and increase its membership base in order to boost its chances of retaining power in 2024.

He encouraged all party members to take active part in the registration process to increase their numbers.

He acknowledged the prevailing hardships in the country, assuring that his government is working hard to ameliorate the plight of the people of Ghana.

President Akufo-Addo assured party members of turning things around in the coming days.

He cited his government’s negotiations with the International Monetary Fund (IMF) as part of the measures to address the current situation.

According to him, the first phase involves all the executives of the party from the polling station to the national level before they will start registering the party’s supporters from all the constituencies in the country.

He applauded the new initiative by the party and maintained that this new membership card, which has a superior technology, is the best in the sub-region if not the whole of Africa.

“One unique thing about the new membership drive is that the card is forever unless one decided not to be a member again,” he said, stressing further that “members can pay their dues and make donations from their member account area, by SMS or others”.

He indicated that all dues paid or donations made to the party will be credited into the party’s account directly.