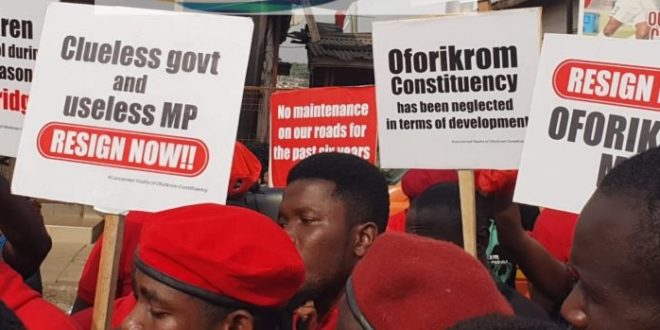 Members of a group calling itself the Concerned Youth of Oforikrom in the Oforikrom Municipal Assembly of the Ashanti Region have embarked on a demonstration over what they describe as neglect of development by government for the past 6 years.

On Saturday 21st January 2022, the group moved through the streets of Okorikrom calling for the resignation of the Member of parliament for the area, Emmanuel Kwabena Marfo and his Municipal Chief Executive (MCE), Mr. Abraham Kwame Antwi over what they call “lack of development in the Oforikrom constituency.”

Some of the words written on their placcards includes; ‘Clueless govt and useless MP resign now!!,  Oforikrom constituency has been neglected in terms of development, no maintenance on our roads for the past six years and many others

Regarding the roads, he indicated that all the deplorable nature has turned them into death traps.

“When we protested against the Municipal authority over the broken pedestrian bridge linking Anloga to Sisakyi, suburbs of Oforikrom, residents in the two communities made several calls to the municipal authority to fix the bridge but all fell on deaf ears,” Mr Jerry Sukah said.

According to Mr Jerry Sukah a.k.a Papa J, the two (MP – Emmanuel Kwabena Marfo and MCE – Mr. Abraham Kwame Antwi ) have failed to have failed to address several challenges in the constituency.

Some of the demonstrators says they are highly disappointed at the local level by the MCE who failed to implement any major developmental projects within the Municipality and as such must be replaced.

Two of such incidents happened at Oforikrom and Susuanso.