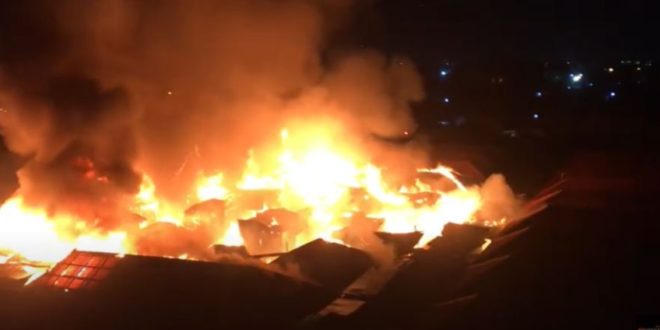 Three chiefs from Ellembelle and their driver sustained burns when the vehicle they were traveling in, was set ablaze by unknown assailants.

The chiefs are; Nana Anokyi IV, Chief of Anokyi, Nana Akpanye Armo II, Chief of Awiaso, and Nana Blaychie, Chief of Ekpu in the Ellembelle District of the Western Region.

They were said to be returning to their residences after witnessing the successful installation of a new chief of Agyambra, Nana Amenkyi Fabin V.

The driver of the vehicle, with registration number GR 2304-12, Kwame Mensah, narrated to the Ghana News Agency (GNA) that a road block had been mounted around the rubber plantation at Agyambra en route Nyamebekyere popularly called 32.

He said upon reaching that section of the road, he stopped and alighted from the vehicle but to his surprise, five men came from the bush with one holding a gallon of petrol and poured it on the vehicle and set it ablaze.

He alleged that the men belonged to another faction in the community that also laid claim to the throne.

The driver said the fire started burning the vehicle but they managed to escape.

Nana Anokyi, on his part, explained that he escaped through the rubber plantation and later got to the 32 Customs Duane barrier at Nyamebekyere and informed the police on duty about the incident.

He said the driver, who sustained severe burns, was rushed to the St. Martin De Porres Hospital at Eikwe in the Ellembelle District for treatment.

Meanwhile, the Ahanta-West Municipal Police Commander, DSP Valentine Akposu, told the GNA that the Command had launched an investigation into the matter.

See also  MoE To World Bank: There Is No Outstanding Obligation In Respect Of 2021 Audit Report On GALOP

He, however, declined to comment further on the matter.