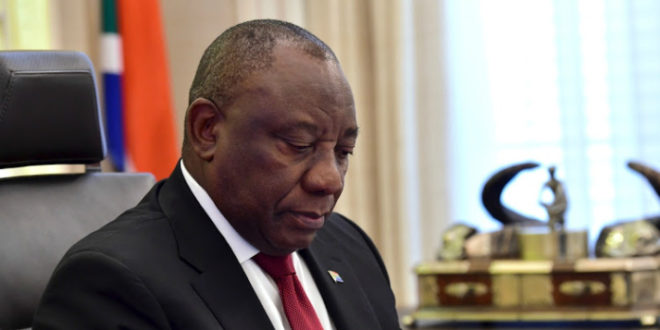 (in the pic - President Ramaphosa putting final touches to his speech before walking to parliament). President Cyril Ramaphosa accounts to the nation on the work of government during his response to Questions for Oral Reply in the National Assembly in Parliament, Cape Town. The Questions for Oral Reply are some of the effective mechanisms Parliament uses to hold the Executive accountable.President Ramaphosa among other Questions, briefed Parliament on government’s approach to the national discussion on proposals by the governing party that the Constitution be amended to indicate the conditions under which land could be expropriated without compensation, to advance land reform. 22/08/2018, Elmond Jiyane, GCIS

South Africa’s parliament is expected to hold a special sitting on Tuesday to debate a report by a panel of legal experts which found that President Cyril Ramaphosa may have broken his oath of office.

This is in connection with the Phala Phala farm scandal hanging over the president, in which Mr Ramaphosa has been accused of a cover-up following the theft of foreign currency at his private game farm back in 2020.

President Ramaphosa’s fate will be in the hands of MPs as they vote on whether he should be impeached.

Evidence of potential misconduct after allegations that he concealed the theft of foreign currency from his game farm has fuelled calls for him to step down.

The governing ANC party has instructed its 230 lawmakers, including those known to be against the president, to reject the report because its findings have been challenged in court.

But some could break ranks and side with opposition parties for impeachment proceedings to get under way.

If Mr Ramaphosa survives the encounter in parliament, he is likely to be re-elected as ANC president at the party’s elective conference which starts on Friday.